(Boston) - July 13, 2017 - Boston Medical Center (BMC) is taking its reputation as the greenest hospital in the Boston area literally, as the once barren roof on top of its power plant building has been transformed into the largest rooftop farm in the city. The 7,000 square feet of growing space, already flourishing with fresh produce, including arugula, bok choy, radishes, Swiss chard and kale, is expected to produce approximately 5,000 pounds of food this growing season, most of which is going directly to BMC patients.

Close to 1,800 pounds of crops were harvested from the rooftop farm in June alone. BMC’s Preventive Food Pantry received more than 960 pounds of the first yield, and the hospital’s kitchens received 830 pounds, ensuring the food is widely distributed to cafeterias across campus and that it is used in patients’ meals. Programs through BMC’s Teaching Kitchen have also given the BMC community opportunities to visit the rooftop farm and learn about cooking with fresh, seasonal ingredients. Later-season crops such as tomatoes, eggplants, cucumbers, summer squash, and peppers will be ready for harvest in mid-to-late July. 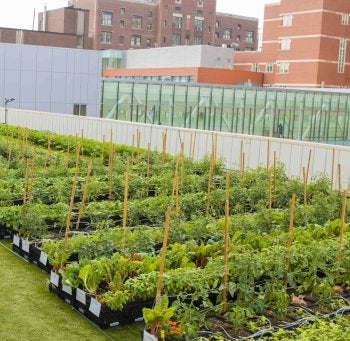 The rooftop farm, located three stories high, can be seen from the upper floors of BMC's Shapiro Ambulatory Care Center

“Boston Medical Center provides outstanding medical care to patients every day, but we also know that the building blocks to healthy and happy lives include the food we eat,” said Kate Walsh, president and CEO of BMC. “This rooftop farm will provide nutritious food to our patients, and it shows BMC’s commitment to health and the environment.”

“The goal with our rooftop farm is to provide fresh, local produce to as many of our patients, employees, and community members as possible,” said David Maffeo, BMC’s senior director of support services. “This initiative supports our mission to address social determinants of health by 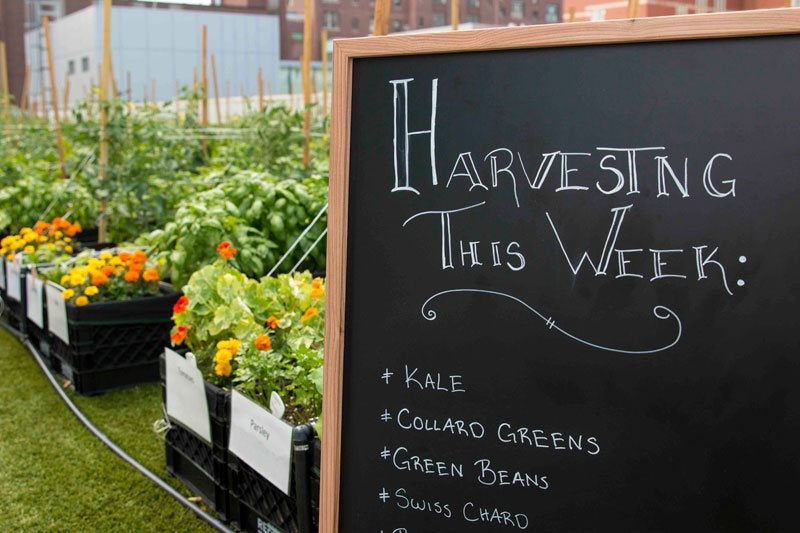 improving access to healthy fruits and vegetables, and it is a perfect example of BMC's dedication to sustainability and green efforts.”

The brainchild of Maffeo and Robert Biggio, senior vice president of facilities and support services, with the support of BMC’s Office of Development, the rooftop farm project was a year and a half in the making. Maffeo worked with Lindsay Allen and John Stoddard of Higher Ground Farm to find a rooftop and growing system that would work best for BMC’s needs. The farm was designed and installed by Somerville-based, Recover Green Roofs, and Higher Ground Farm is managing the growing. Allen, who is serving as BMC’s first farm manager, also completed a light study of the roof to determine the feasibility of growing crops in the space.

“I think one of the other important ‘harvests’ from the farm is the knowledge exchange that will happen around  health and local food in relationship to the farm,” said Allen. “We are what we eat, so the more people we can provide healthy, nutrient dense food to, the healthier our communities will be.”

According to Stoddard, founder of Higher Ground Farm, rooftop farms function similarly to ground level farms and generally can accommodate the same crops as other farms. The main constraints on a rooftop are soil depth, wind, and access – you cannot simply drive a truck right up to the farm for a compost delivery.

Two urban beehives, painted to be bright and colorful by BMC’s pediatric patients, were installed on the rooftop in early June. Tours, volunteer opportunities for employees, and programs through The Teaching Kitchen for patients have 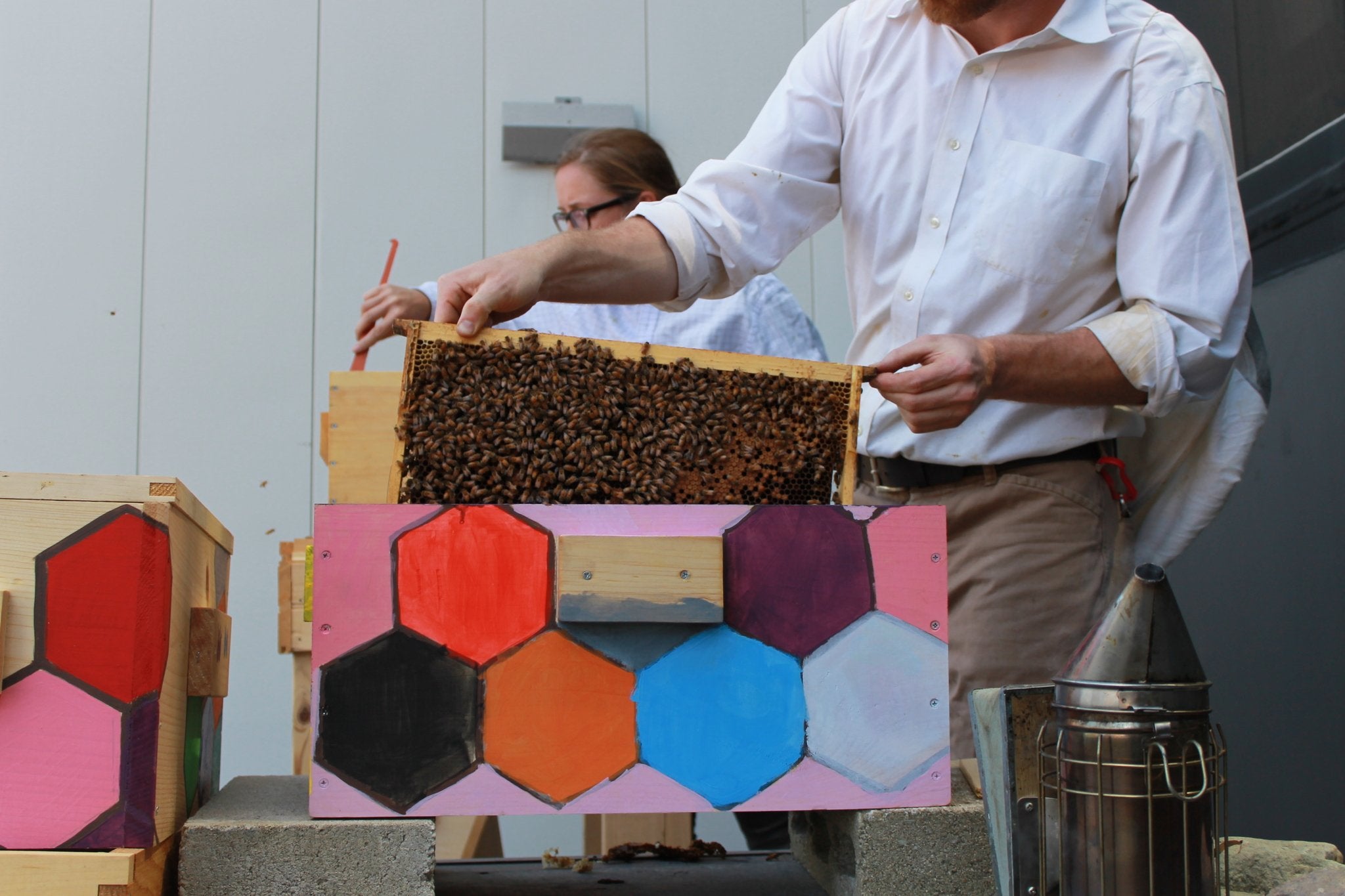 allowed dozens of other individuals to get hands-on experience on the farm.

The rooftop farm reduces BMC’s carbon footprint by increasing green space, adding carbon-breathing plants, and reducing the building’s energy use. The farm absorbs and slows the flow of rainwater, which helps address the issue of “combined sewer overflows,” a common urban problem where storm water combines with sewage in periods of high rainfall and pollutes waterways. In addition, by producing food onsite, BMC is decreasing the energy required to transport food.

The rooftop farm is only the latest green step BMC has taken. As part of a clinical campus redesign, BMC is cutting emissions by 50 percent, and last fall, the hospital announced a solar power purchase agreement with MIT and the Post Office Square Redevelopment Corporation. The solar purchase is equivalent to 100 percent of BMC’s projected electricity consumption, making BMC the greenest hospital in Boston and on pace to become the first carbon-neutral hospital in New England upon completion of the campus redesign in 2018.

Becker’s Hospital Review has named BMC one of the 50 greenest hospitals in America, and BMC received three prestigious awards from Practice Greenhealth in 2017: the Top 25 Environmental Excellence Award, the highest honor Practice Greenhealth bestows on hospitals, as well as the Greening the OR Recognition Award and the Circle of Excellence award in the energy category.

Higher Ground Farm grows fresh, organic food on rooftops for the Boston community.  Founded in 2013, Higher Ground is Boston’s first commercial rooftop farm, delivering its produce to restaurants and markets throughout Boston by bicycle, and hosting a farm stand at its flagship location at the Boston Design Center in the Seaport district of Boston. Higher Ground won a 2015 Greenovate Boston award, presented by Mayor Marty Walsh, recognizing its outstanding leadership in creating a green and sustainable future for the City of Boston.  In 2017, Higher Ground expanded its operations by taking on the management of the Boston Medical Center rooftop farm.  For more information visit: highergroundrooftopfarm.com.